Just added to your cart

In Depth Look At The Gladius Mini

Welcome back for another blog post from Wanderlust Drones - Today we are diving in-depth with the Gladius Mini. We've been using this drone exclusively for the past 3-4 months and are ready to tell you the ins & outs, pro's & cons. Let's do it!

The first thing you are going to notice when unboxing this drone is the quality of the build. The Gladius Mini has a smooth, sturdy, outer case with a sleek design resembling a fish or shark. The thrusters are all well-protected from any floating debris or seaweed with the sturdy outer case. The Gladius Mini is vented on the top and bottom allowing water to pass through its case. Sand or small rocks can get inside these vents/gills but are pretty easily removed by flushing water through the vents in a sink. The remote and WiFi modules are both made of plastic. They do feel a little light or thin on the plastic, but overall I don't have a problem with either of these pieces. The Remote fits well in my hands and has a nice button layout for the dials & buttons which control the different features of the Gladius Mini. The 4K UHD camera on the Gladius is set into the body of the drone as well, which offers more protection if you were to bump into objects in the water. The lights are bright and easily adjusted with a scroll-wheel on the remote. One thing we love about the lights is how much they attract fish to the drone. We have had a curious fish approach the camera nearly every time we've dropped the Gladius into the water.

The Remote fits well in my hands and has a nice button layout for the dials & buttons which control the different features of the Gladius Mini. The 4K UHD camera on the Gladius is set into the body of the drone as well, which offers more protection if you were to bump into objects in the water. The lights are bright and easily adjusted with a scroll-wheel on the remote. One thing we love about the lights is how much they attract fish to the drone. We have had a curious fish approach the camera nearly every time we've dropped the Gladius into the water. 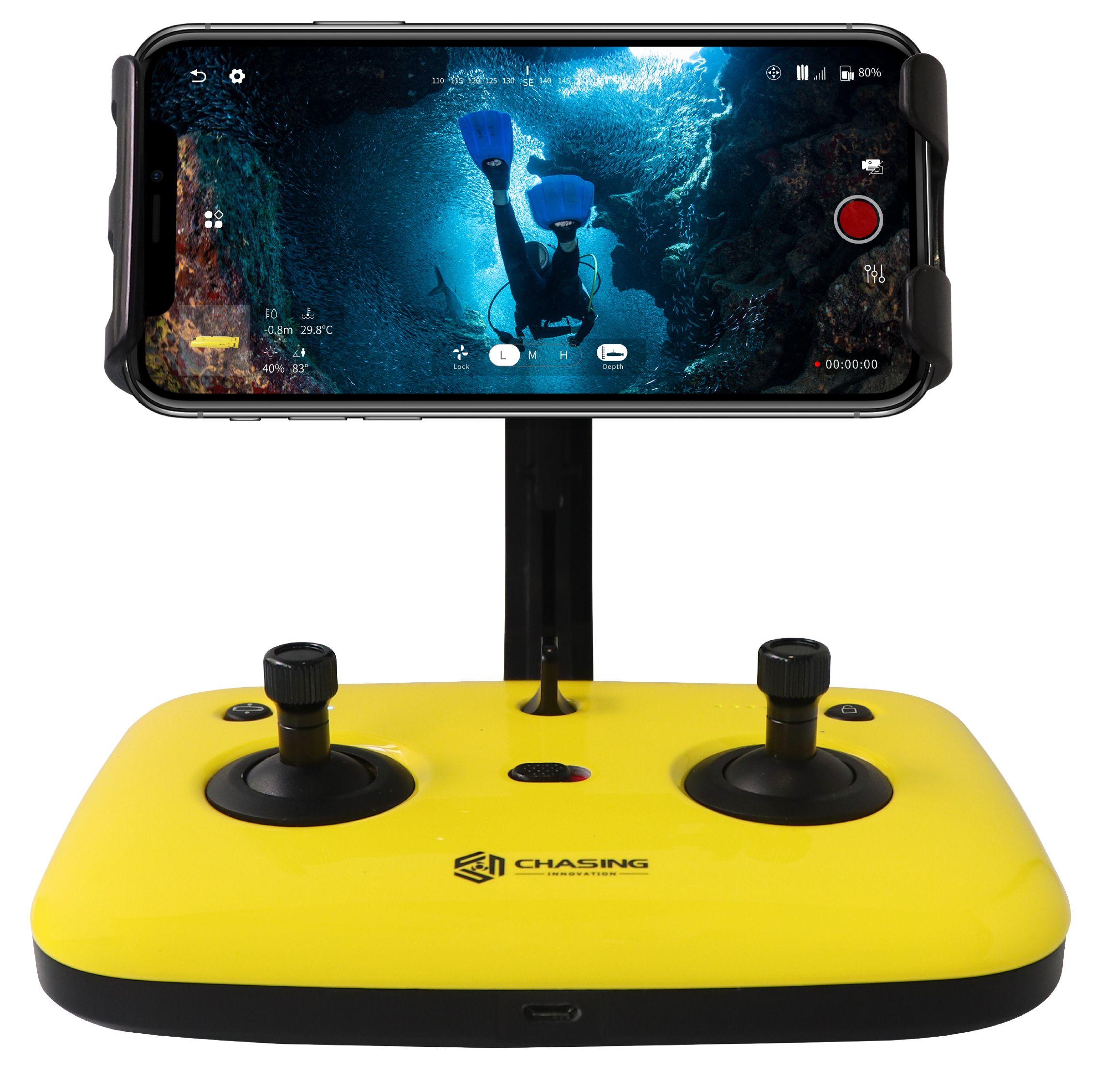 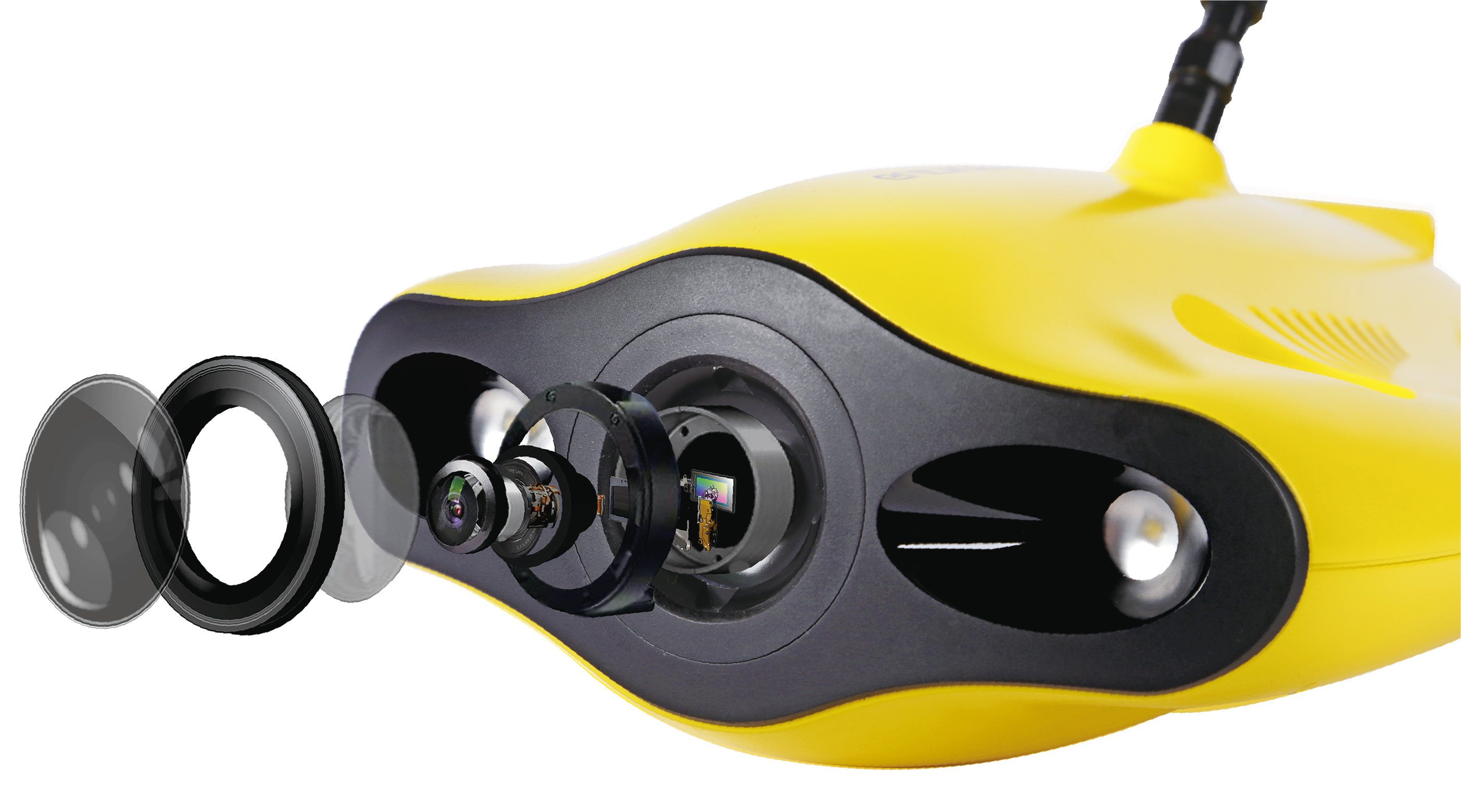 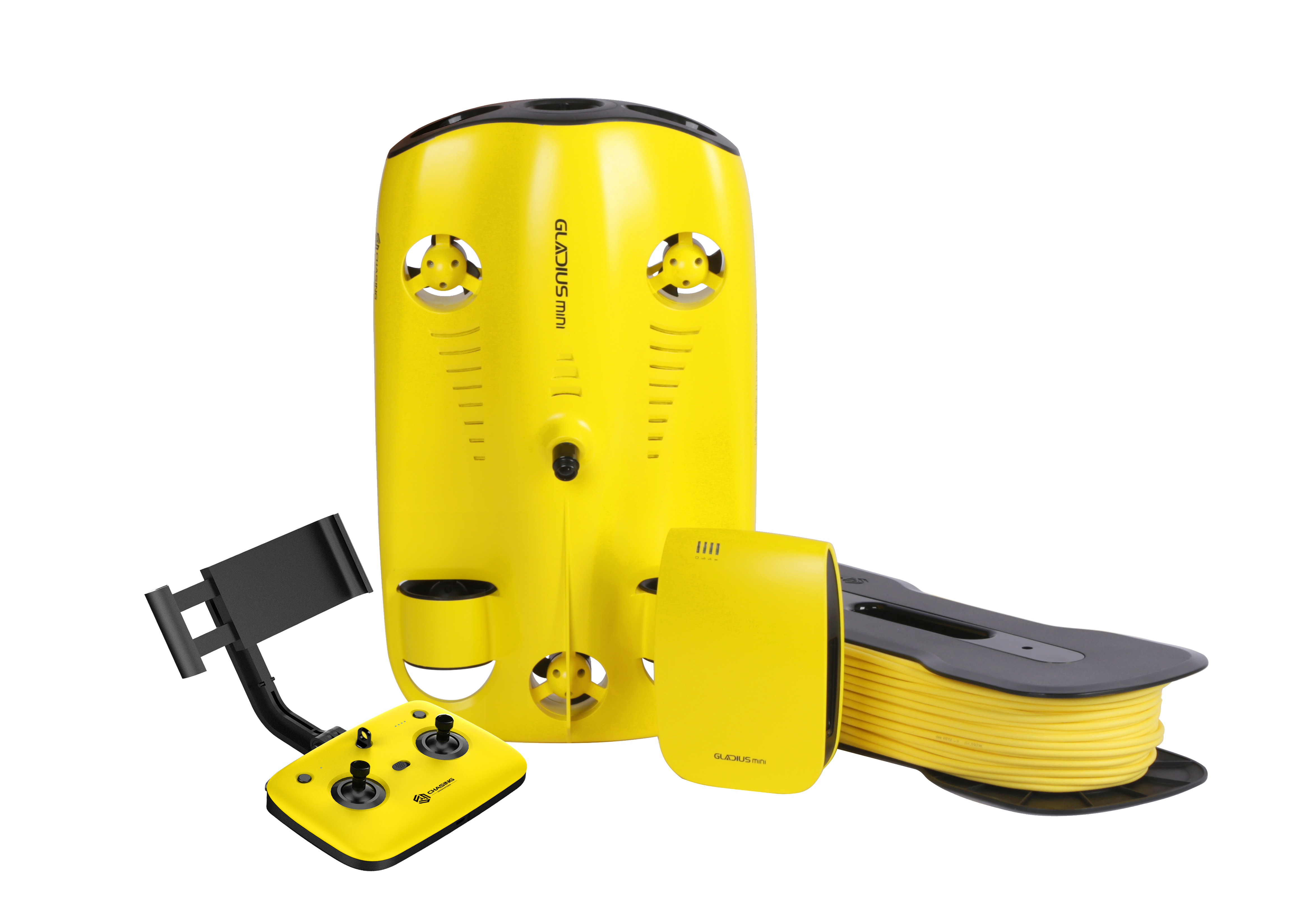 The Mini comes with a travel backpack which feels just as professional as the drone. As soon as you open the backpack, you'll see that a hard foam has been shaped to hold each component that comes with the Gladius Mini. The backpack also comes with dry bags to put your wet drone or wet tether reel into, keeping the backpack dry. Lastly, the backpack contains a towel with the Chasing logo and colors on it. The towel is incredibly handy to have after a day of splashing around in the water with the Gladius Mini. Everything fits tightly into the travel backpack, although I've been rolling up the towel and placing it in the outside net side-pocket. 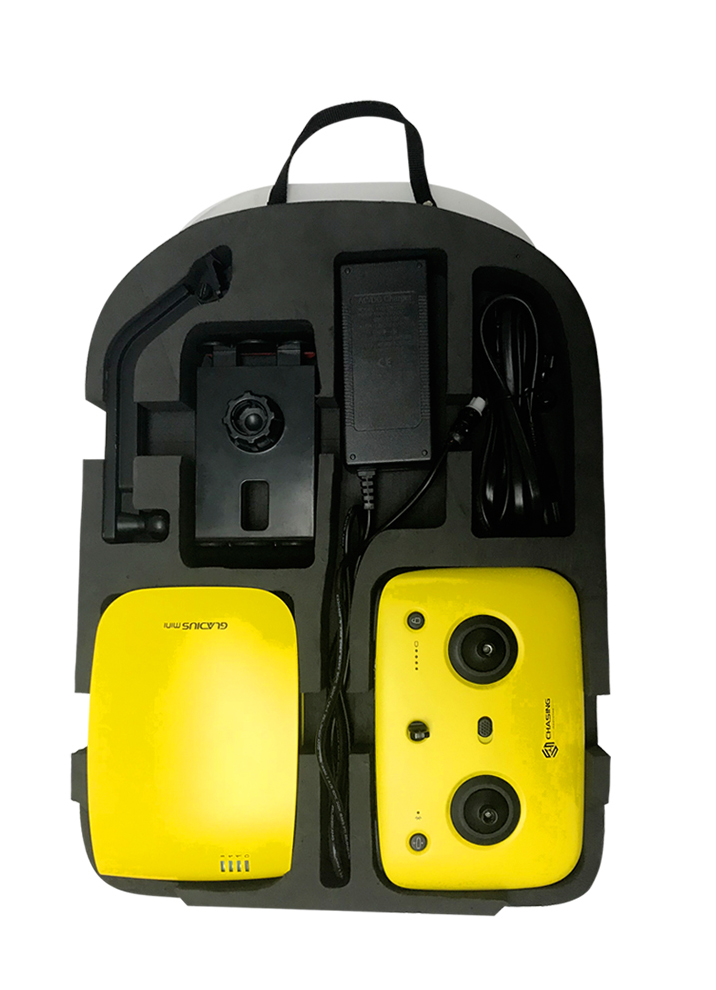 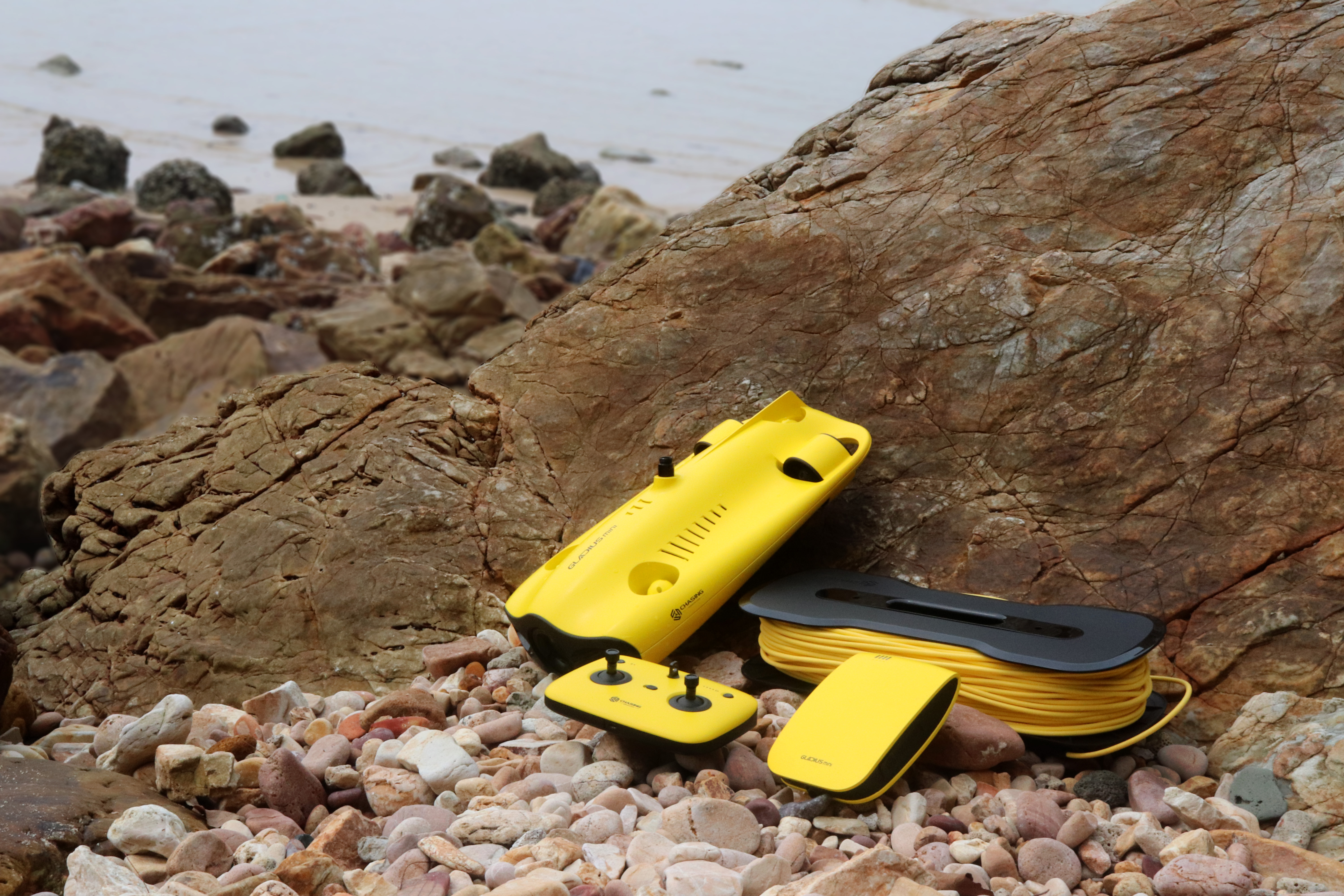 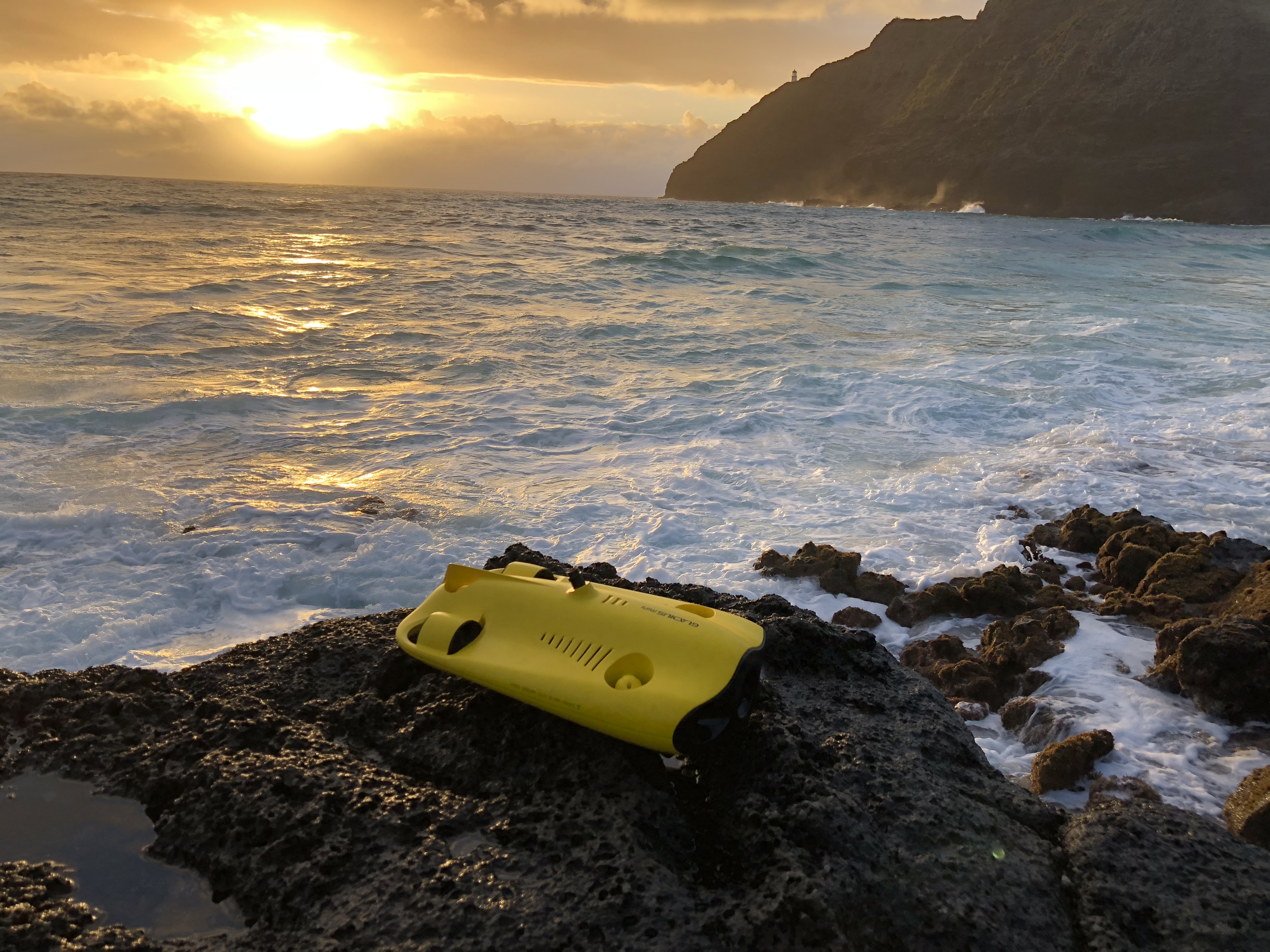 The Gladius Mini packs some of the most impressive features on the market, while maintaining an affordable cost. We are still finding new ways to use the drone and it's features, even after several months of using the drone.  Let's take a look at what the features:

We have been blown away by the features and how easy they are to use. The footage that comes out of the Gladius Mini is unbelievable. 4K quality with colors that seem unreal. Of course, this depends on the water clarity and subject matter. My personal favorite feature is the 45 Degree Tilt. It's incredibly useful when scanning or filming the bottom of a lake, seafloor, etc. The tilt and tilt lock allows me to tilt the Gladius Mini angled toward the bottom and highlight the different things down there. Without this feature, we'd be stuck moving the drone directly forward and above objects without the possibility to look down or up at different subjects. This is extremely limiting. Hand in hand with the Tilt is the Tilt lock, which allows me to focus more on my movements while keeping the drone completely locked in at the designated angle.

Coming in second place for worthwhile features is the Color Correction. Anyone who has dived with a camera or video camera before knows how important it is to have color lenses or be able to color correct the footage. The Gladius Mini app allows the pilot to adjust any color settings live while filming. This is an amazing feature and saves an absurd amount of post-production work. The beaches where I grew up in Florida are beautiful, but unfortunately, the water closer to shore can appear very green in videos. The in-app Color Correction allows me to adjust the colors until that water is looking incredibly blue and beautiful, just as it appears out of the water. The "Live" sharing of the drones feed is a really neat feature as well. Unfortunately, when sharing live, the video quality drops to 720 but it's still a fun thing to use to show friends and family where you are at. 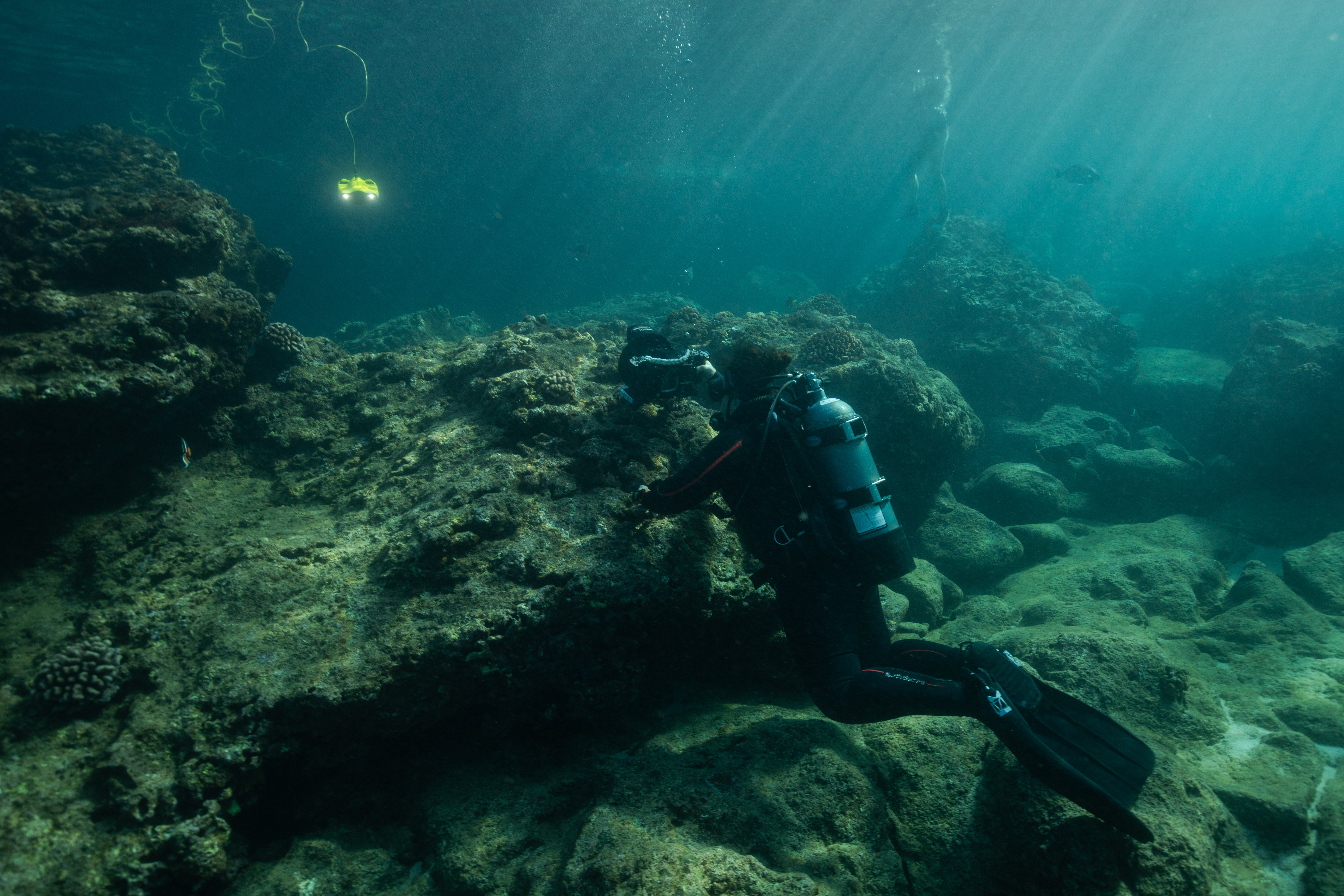 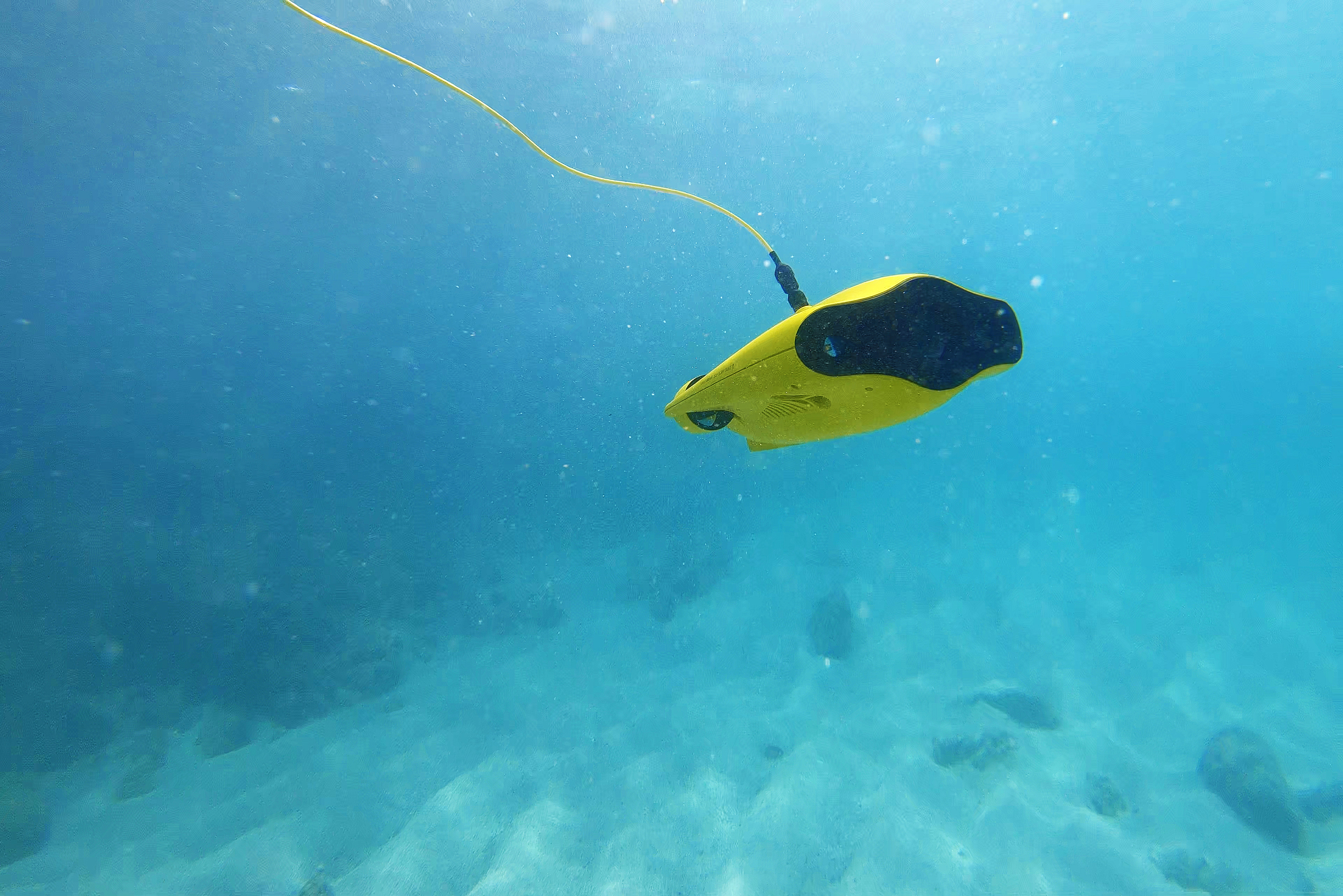 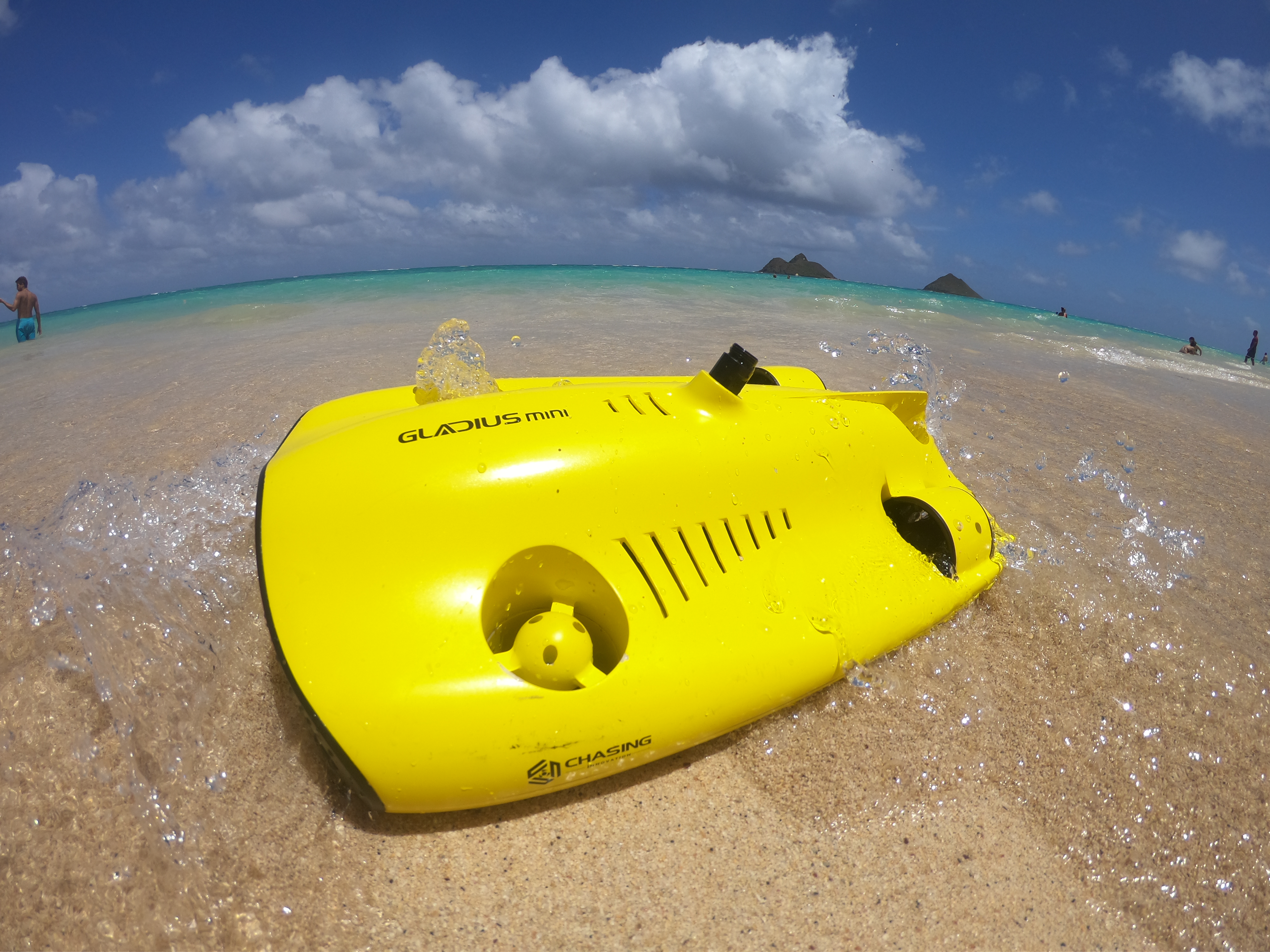 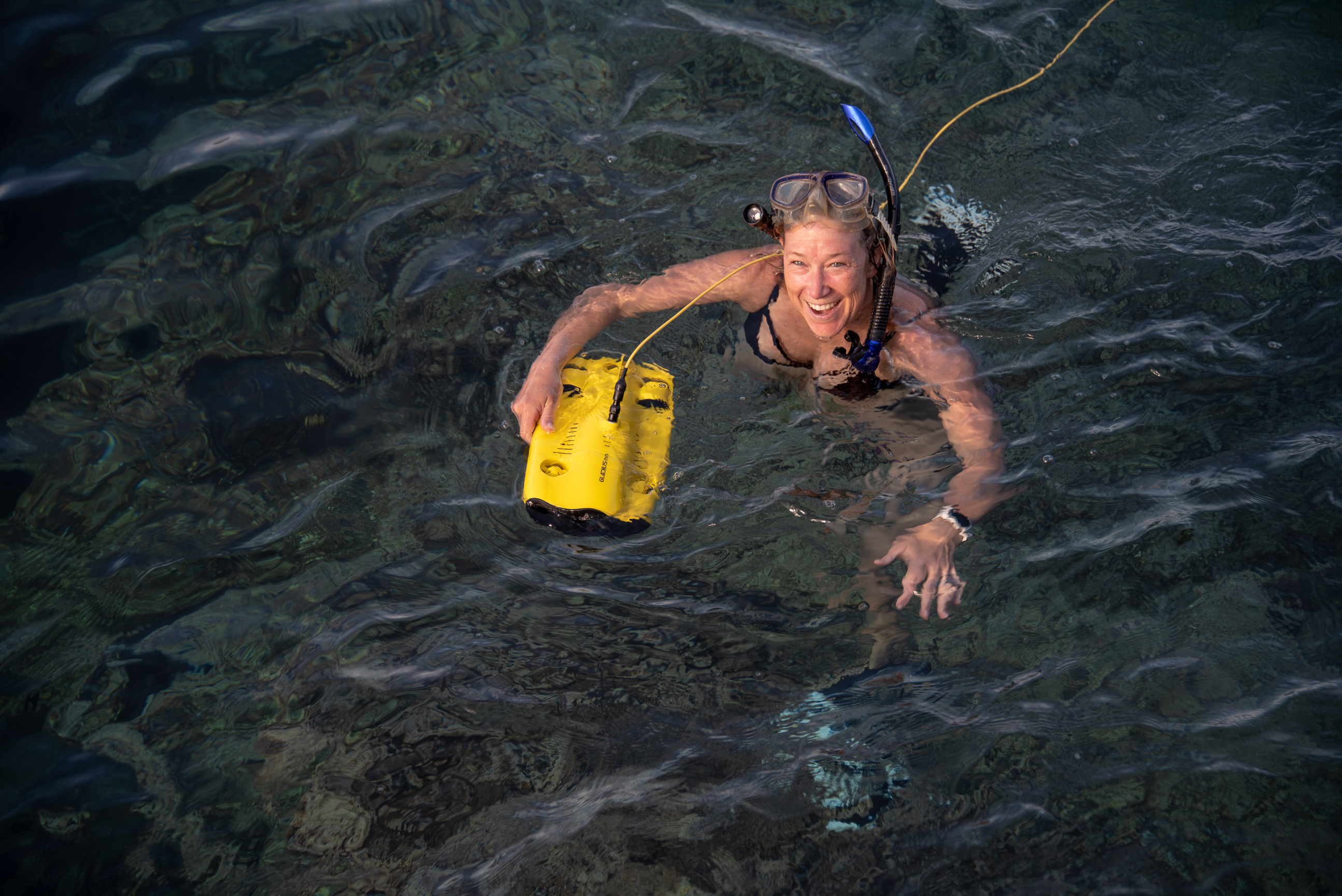 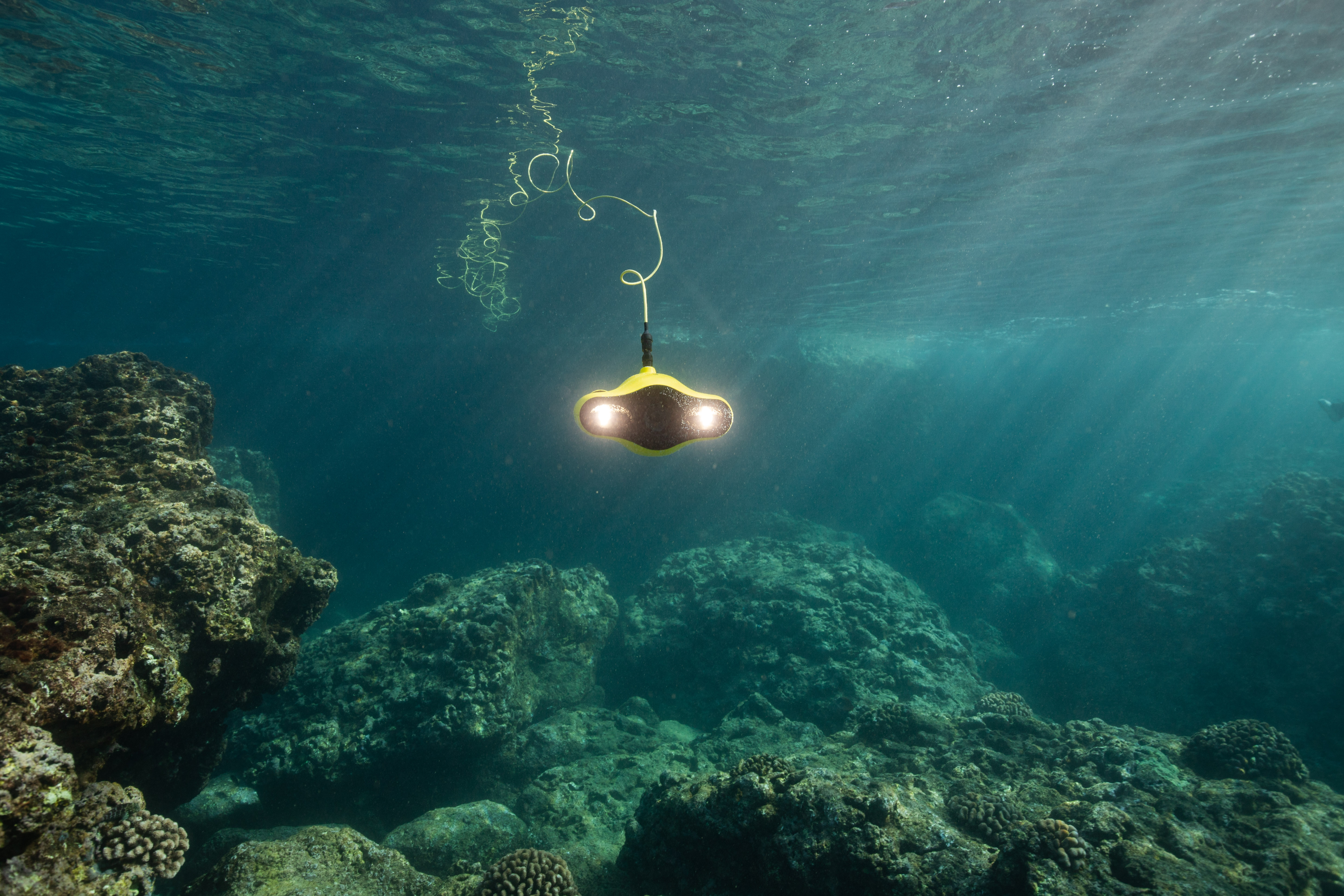 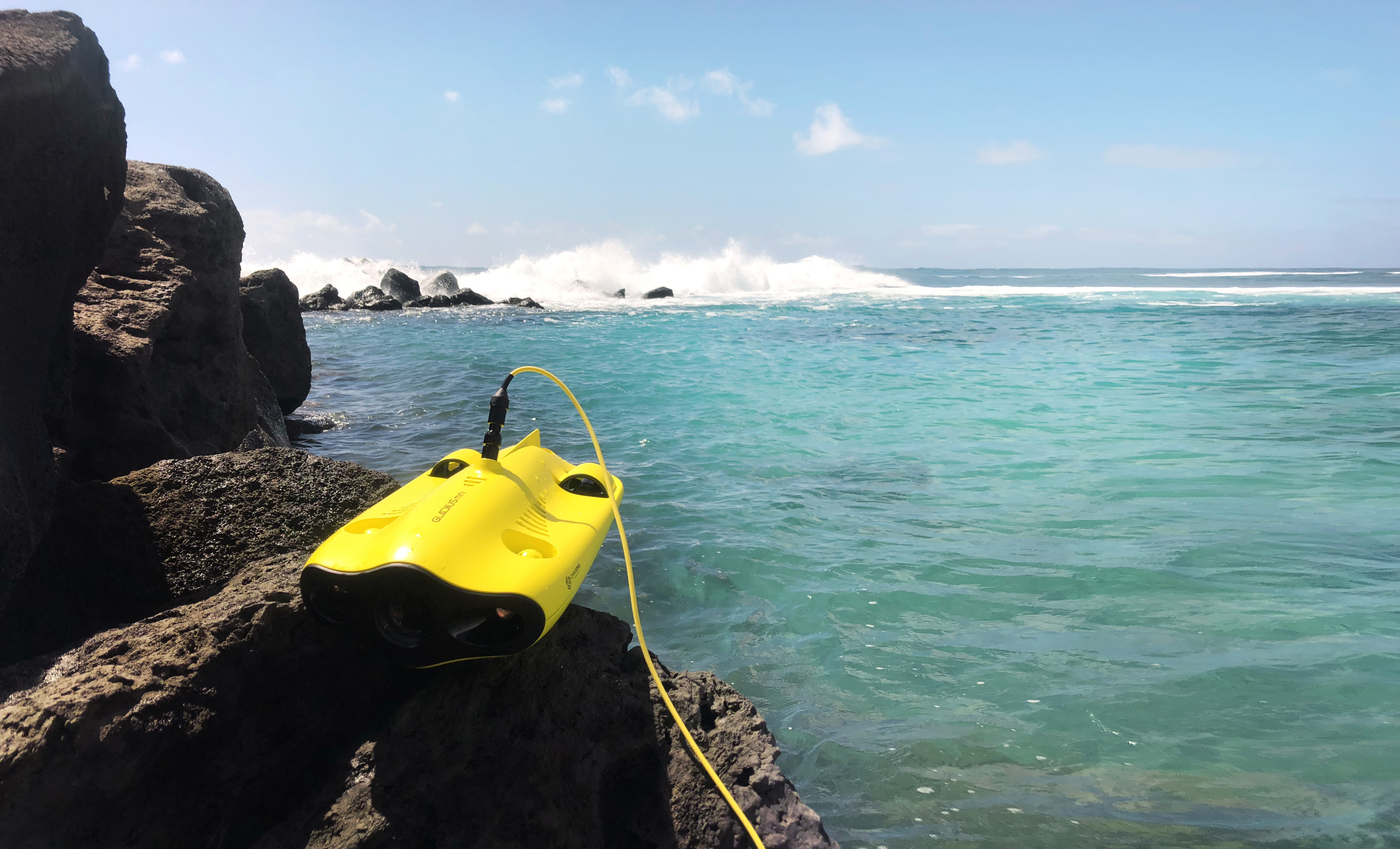 For our first dive with the Gladius Mini, we drove out to Copper Mountain in Colorado. My wife and I have fished at this spot off the highway which has incredibly clear water. After calling the rangers in the area to get the OK on putting the drone in the water, we set off. The setup for this drone is very minimal. It's as easy as plugging a tether in, powering on the remote & module, flipping on BlueTooth for the live-stream device (phone, tablet, etc).

Within minutes, the backpack had been emptied and the drone was already off in the water. The controls were incredibly easy to get used to. The two thumbsticks made controlling the Gladius Mini feel like a video game. All I had to do was watch my cell phone screen to see the live-feed straight from the drone. Even though we didn't have the best cell network connection, I was able to test out the Live feature and share the video feed directly from the Gladius Mini to Facebook and Instagram. 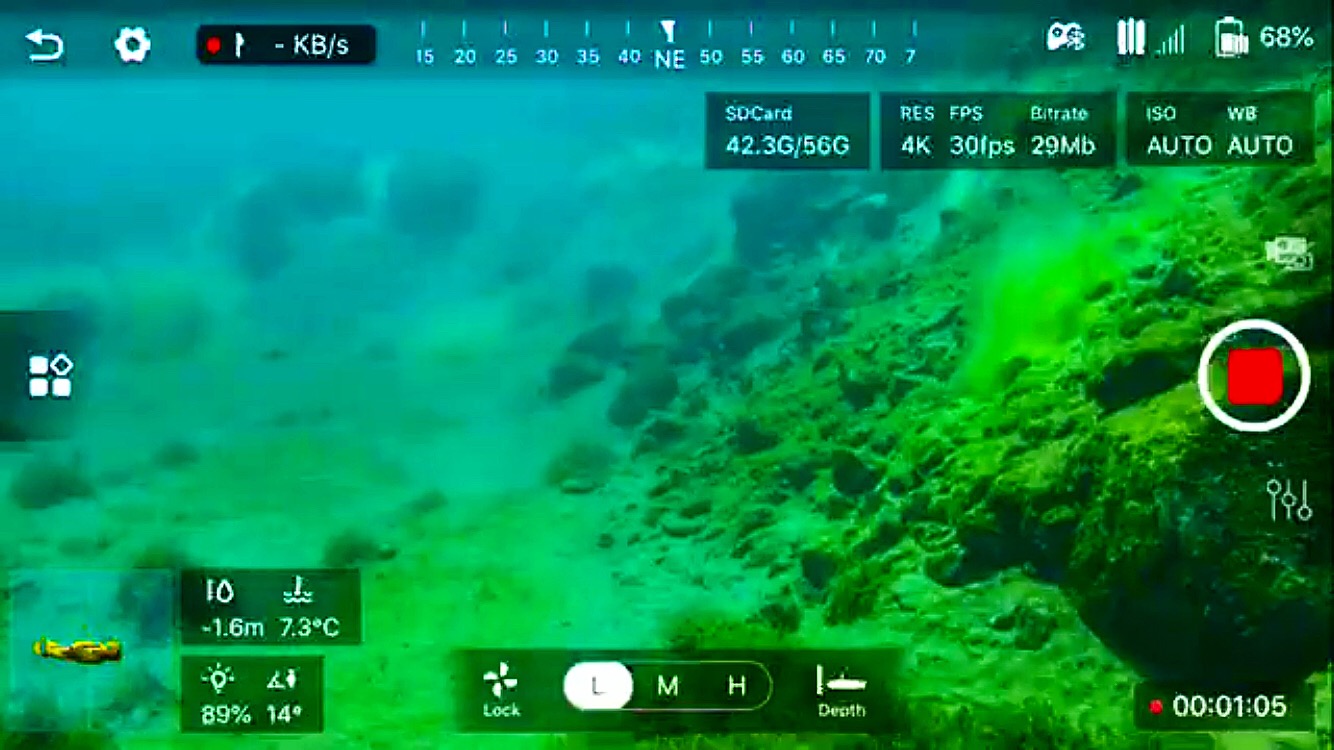 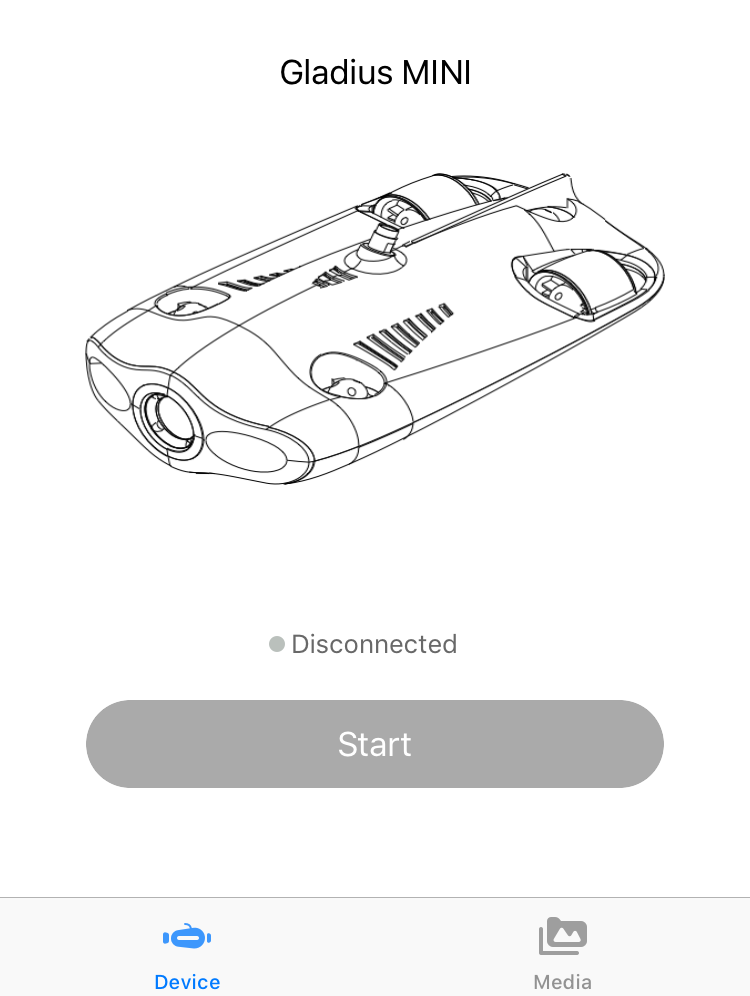 When shopping for drones, it's equally as important to look at the app used with the drone as it is to look at drone itself. The Gladius Mini app is simple, efficient, loaded with features, and designed to be user-friendly. Once the drone has been booted up, the app will pick up the WiFi connection and alert the user that it's connected. As soon as the dive begins, the app is instantly displaying a 720HD live-feed from the drone.

Along with the live feed, the user can see a large number of metrics regarding the drone and its dive. One feature implemented into the app that stood out for me was seeing a small render of my drone in the bottom left. This render allowed me to see the orientation of the drone as well as the tilt it was set at. At first it may not seem like this is so handy, but honestly, it's nice to know which way the drone is facing when it's 40ft down and out of sight. The Gladius Mini app also allows the user to control the color correction. Color correction is done by adjusting sliders on the screen to allow more color tints into the video.

The live feedback from the adjustments allows this feature to shine and save that post-production work we discussed earlier.  Seeing the metrics like depth, speed, angle, and more make using the Gladius Mini App incredibly easy and efficient. We felt completely comfortable from our first dive. Lastly, within the app, you can download the videos and still shots directly from the drone onto your device. Let's cover that here in the next section. 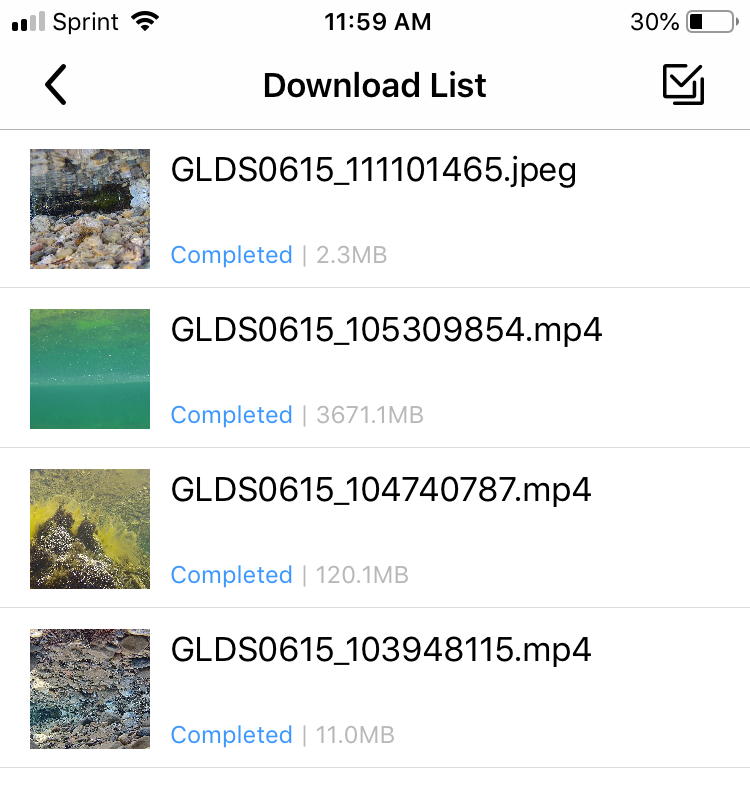 There are multiple ways to get access to the videos and photographs taken with the Gladius Mini. First, you can download them straight through the mobile app. This is great for social sharing as the videos will already be put onto your phone to upload to your social media accounts.

Secondly, when the Gladius is powered on and connected to the WiFi module, you can access the WiFi network from any PC or similar device. It's as easy as connecting to the Gladius WiFi and going to the network address:  http://192.168.1.88 which will pull up all the media saved to the internal SD card on the Gladius Mini.

I personally love having more than one way to access the media. Even though it seems like it could be extra steps on a PC, the WiFi connection is very fast and efficient at transferring the files to my PC. Since we can't remove the SD card, we can't lose it :)

We were blown away by the features packed into the Gladius Mini, and just as impressed by the quality of it's build. The Gladius Mini is a serious contender for the top drone in the underwater drone market, which is truly impressive. The features, build and having support for this drone in the US (not requiring a call to china), we can see why users are flocking to this drone. What would you like to see Chasing do with their next drone? We'd love to hear your thoughts.

Explore deeper, record better, and be more adventurous with the all new Gladius Mini.